As we expected Hackpen was especially tough and the crosswinds down to Lambourn were 'interesting'. After that though with the wind mostly at our backs we had a great ride down the Lambourn valley to Newbury despite the standing water in places. There was a fantastic carpet of snowdrops in the woods at Welford Park.

I took the group on an interesting back route through Newbury and over Monkey Bridge over the Kennet and past my school. Paul had discovered a mechanical blunder when fitting a new chain so left us at Newbury to get it sorted before heading back solo.

The rest of us headed off to the control tower at Greenham Common for a break where Phil had driven out to meet us. Pete was especially impressed by the museum.

We had a nice run to Bucklebury including the tough Woolhampton Hill and had a good lunch in the farm park. We were trepidacious about the ride back from Compton but in the end the wind had died down somewhat and it wasn't too bad. We did spread out a bit on the rollercoaster road though as some (i.e. me) started to flag.

A quick dash down Chain Hill to finish at exactly 15:00. A tough ride given the conditions so well done everyone 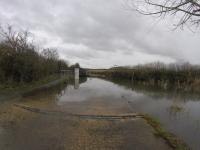 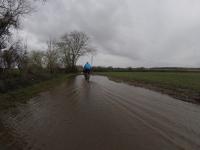 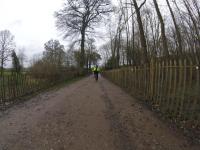 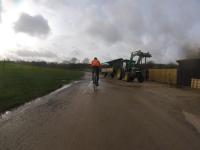 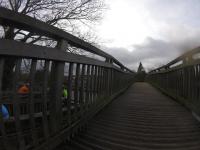 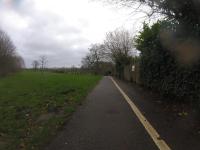