Peter Wrench
Louis Hall
Nick Stokell
Ride Report & Cafe Review
------------------------------------
Three semi-pro (in other words retired) riders turned out today. The rest of you missed out on what turned out to be a lovely day and, although I say so myself, also a lovely route. We made an early stop to enjoy the nice strong coffee at Lynwood & Co. in Bampton. It is a smaller replica of the one in Lechlade so not surprises on the menu here.

The route took us along almost deserted lanes through quintessential Cotswold countryside and villages to our lunch stop at the Community Stores & Cafe in Coln St Aldwyn. I would describe this cafe as adequate. They don't seem to cook anything on site, just warm up paninis and pies and flog sandwiches. Choice was quite restricted but if you are lucky enough that they have something you want (I had the last pre-made sausage & bacon bap) then they do have a nice garden to eat it in. Only limited covered (by gazebo) seating though, so not one for large groups in wet weather.

The fun continued after lunch, now with the added pleasure of a firm tailwind. We made a small and unfruitful detour to try and see a B52 at Fairford, but otherwise it was plane (ha ha) sailing back to The King Alfred's Head for beers. The guest ale today was Oxford Brewery's Trinity - which was excellent, HURRAH! 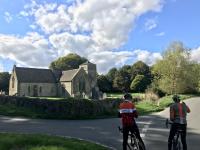 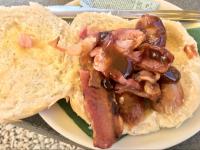 Rachel Bennett
Chris Walters
John Groves
Nick Stokell
Just three of us set off for Yattendon this morning, but having got the climb up Court Hill out of the way we were met by Chris at Wooley Cross. A few more shorter climbs brought us to the very pleasant Pantry, which had a delicious looking selection of cakes (but no flapjack). Chris had to leave us after our refreshment stop, as he had appointments to attend and needed to take a different route back. That left the three of us again to tackle the challenging windy conditions for the return journey. Incident free but the downhills seemed almost as hard as the ups with the wind in our faces. 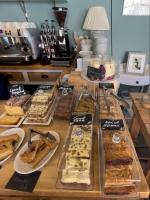 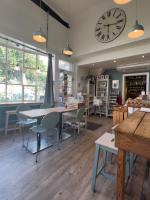 Richard Saunders
Ben Roberts
Caroline Newton
Chris Walters
John Groves
Libby Pannett
Louis Hall
Nick Dunton
Nick Stokell
It was a beautiful day for the welcome ride, if a little chilly to start with. We left Wantage with seven and then we became eight after Ben Roberts joined us somewhere along the route to Denchworth. We made it to Savages in good time and were joined by Caroline Newton, who had missed us at Denchworth, so eight became nine! Everyone enjoyed a leisurely “breakfast” and coffee, service was a little slow, but we were in no rush and were able to enjoy the lovely warm sunshine. We headed back to Wantage and I decided to take a detour back to Wantage via the Harwell Science Park and the Ickneild Way to East and West Hendred to avoid the Reading Road. There were not too many complaints about the gravel surface and it enabled us to get back into Wantage for a swift drink at the King Alfred's Head. 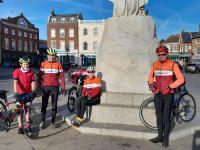 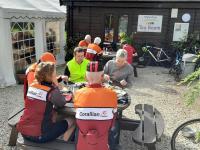 Peter Wrench
John Groves
Nick Dunton
Nick Stokell
Rachel Bennett
Richard Saunders
Simon Pittard
Our convivial group of seven riders set out from Wantage and chatted our way along the spring-line road to the foot of White Horse Hill. Chatting was replaced with panting for a short while as we took on the hill. With that test over we enjoyed the perfect conditions and made good time down to Shrivenham for coffee. Although the cakes were good, especially the banana & blueberry loaf, they could not compete as the centre of attention with Rachel's new bike aka Beppe. After some extended cooing and a close quarters admiration we set of again and aced the flat final leg with some fine group riding. Richard peeled off at Shellingford to go and deal with a mudguard malfunction while the rest of us rounded off the day with refreshments in the Fred's Head (and some more billing & cooing over Beppe).

A nice, chilled ride - they don't get much better than this. 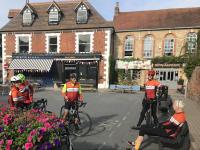 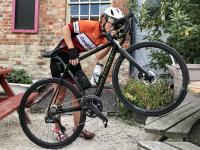 Away Ride - Longleat and the Tunnels of Bath

Nick Stokell
Louis Hall
Shame there were only two of us but we had a splendid ride through varied terrain on a very pleasant day.

After an early coffee stop at the Village Shop at Steeple Ashton we enjoyed mostly quiet roads down to Longleat, with the exception of 5 km of the B3098/A350 around Westbury which are always busy and difficult to avoid. The swooping descent through Longleat in the sunshine with far-reaching views was probably the highlight of the ride. La Strada Cafe in Frome provided decent all-day breakfasts (though it would be a bit short on bike parking space for a large group).

The cycle paths through old railway tunnels provided a relaxed route into busy Bath city centre. At Bathampton , after a section on canal towpath, coffee and dessert at the George pub set us up nicely for the long climb up Oakford Lane from Northend to the Fosse Way and the descent back to Castle Combe.

Thank you Louis for your excellent company!

(ps Despite contrary indication on the Wiltshire website the car park at Dunns Lane. 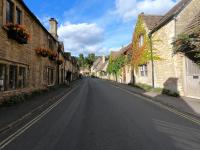 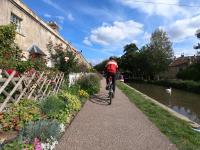 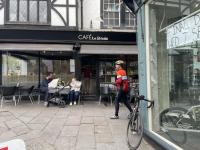 Nick Dunton
Louis Hall
Nick Stokell
Peter Wrench
The first Wednesday ride of the winter season. Dull and cool to start but conditions steadily improved with warm sunshine by the end. Some of the route was new even to this experienced group of riders (including a short piece of off-road single-track through a wood), which is always pleasing for the leader. We were making good time but some dissent in the peloton forced a coffee stop at the Lamb Inn, Crawley: the coffee was excellent but the food was a bit pricey, so we pushed on to Aston Pottery for sandwiches. We chatted to Richard Preece there who hopes to be riding with us again soon. Fueled-up, we made short work of the return and were back at the Market Square for the traditional KAH rehydration by 2.30: 100% attendance on this occasion.

Richard Saunders
Chris Walters
John Groves
Phil Stubbings
Simon Pittard
We were joined on the ride today by Luke (partner of John Groves’ daughter), who turned up on mountain bike. There was no concern with him keeping up with the pace! We headed out through the Letcombes, Childrey, Kingston Lisle, Uffington before stopping at the Farringdon Coffee House, the coffee was excellent. We made our way back to Wantage via Hatford, Stanford-in-the Vale and Denchworth. We finished with a drink at King Alfred’s Head and fortuitously the ride was slightly shorter than normal (45km), as the rain started just as we sat down to enjoy our drinks. 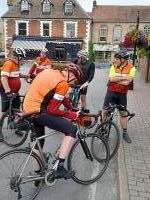 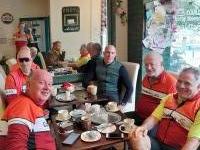 Nick Stokell
John Groves
Rachel Bennett
Richard Saunders
Delighted to find three other willing souls at the Market Place (having expected none with the prospect of a wet morning), though John, psyched up for Sincombe Hill (but not Ashbury Hill!) was disappointed to find that I'd chosen the anti-clockwise direction. The drizzle started shortly after we passed through Uffington and became progressively heavier. Rain jackets were donned by the railway bridge and John headed back via the vale, and at Ashbury the decision was taken to continue on to Lambourn. After the slog up Asbury Hill into the wind and the now quite heavy rain, we made rapid progress down to our coffee stop at Lambourn, with a continuous rotation of leader. As we lounged around in the soft furnishings of Goodies Cafe, drying out, the weather outside improved for the return back to Wantage. Thank you everyone - good to get out in the damp! 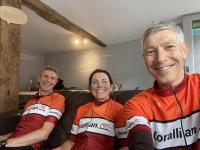 The food was good, especially the BLT and the pancakes. The staff were very pleasant but unfortunately service was overwhelmed by a private party of 40. Our food arrived piecemeal and so there were winners and losers. Louis established an early lead with the first delivery of a fine BLT then clinched victory by polishing off a huge wedge of cake and coffee before most of the group had even received their orders. There was some sausage envy among the fry-up eaters and the last to be served poor Nick D had to endure us all watching him eat. We were in there for an hour all told!

From there we cracked on with some nice group riding over to Bampton where we paused for ice-creams and pop before taking on Buckland hill and the familiar run home. No takers for the pub today so I was home in time to watch the last 40 minutes of the Tour of Britain stage 1. What was Tom Pidcock up to? 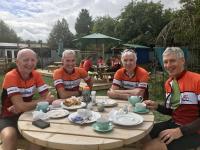 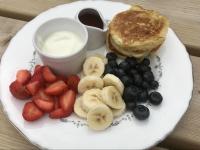 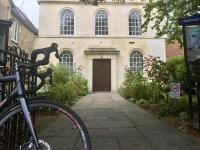