Peter Wrench
Andy Newell
Chris Walters
John Talbot
Ken Castle
Louis Hall
Paul Jarvis
We gathered at Charlbury station in cool but sunny conditions, cool enough to prompt a mixed bag of shorts and tights wearers within the group. But the weather remained kind to us all day and I thought it was just about right for this hilly ride.

Most of the ride was on quiet back roads, many of which were miraculously well surfaced, quite recently too by the look of things. The usual tourist hot spots were reasonably busy, but not unduly so and definitely less than would be the case in a normal year. We quickly escaped onto the lesser known back roads to ride through picture postcard villages and over hilltops with distant views.
To avoid the hassle of queuing and the danger of over-indulgence before the big climb, lunch at Broadway was simple fare from the Co-op eaten in the pleasant courtyard in front of the shop. Underway again, after pausing at the bottom for an equipment check, we duly conquered Snowshill, rode through the lavender fields and onwards over the two cheeky climbs that came after.

Paul experienced some trouble with a dragging rear wheel or freewheel bearing that sapped some of his power but he bravely rode through this issue to the finish. Getting back to the station just in time to spot the 16:15 to Worcester was an added bonus. There was an air of general contentment and everyone was smiling was we packed up the bikes for the drive home. All except for Louis that is, who, having already ridden out to the start girded himself ready for the ride back home. 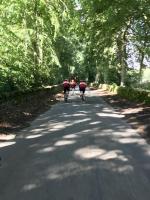 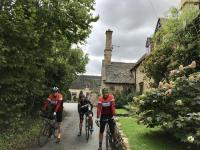 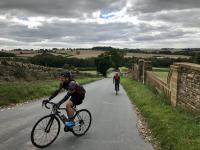 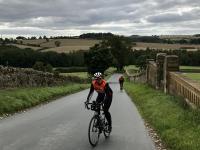 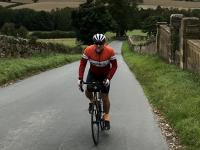 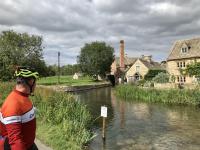