x7  x1
Chris Walters
Adrian West
Des Higgs
Jasmine Talbot
Jenny Gower
John Talbot
Terry Penn
It was a rather quiet event, but we managed to sort out a few bike with persistent problems - valve cores and calliper brakes and gear indexing. It does make you realise just how good the engineering in modern bike components is when you have to try and sort out old school bikes!

Terry and Jenny rode across - Jenny's bike having just had a service, so running like a dream, and Terry's looking like it needed one! At least Terry's ride home had better functioning gears than his ride over!

Thanks to the Talbots and Adrian for coming over to lend moral support and scoff Mrs Higgs' Exceedingly Good Cakes. 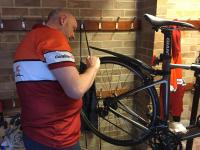