We arrived, having driven from the sunshine in Oxfordshire, to cool misty conditions, But with the promise of brighter skies later.

The ferry was delayed on the way out so we started a bit later than usual and heading to the Needles which were visible and atmospheric in the mist.

Chris picked up a puncture at Compton Bay so we had a little extra time than normal admiring the view. After Chris was sorted we made good progress to Godshill despite a niggly headwind as the Sun made occasional visits from behind the clouds.

After a short break to refresh and refuel we headed off to Bembridge where the Sun came out properly as we ate lunch by the beach.

The usual busier roads to and through Wootton Bridge are less attractive and it's a joy to get off them and back on quieter roads to Cowes where we only had a short wait for the floating bridge.

As we had no hope of getting to the 17:20 ferry we had our usual ice cream stop at the cabin at Cowes just before they shut (why they close so early on a sunny Sunday I don't know, seems bizarre as they could get loads more custom).

As is common with the IoW ride with a bigger group tiredness began to creep in after the Gurnard climb and the lumpy roads split the group somewhat. The beautiful new tarmac for the last few flat km is an absolute joy and the front group pushed on whilst the rear group enjoyed the late afternoon sunshine at a more leisurely pace.

We all arrived in plenty of time for the 18:20 ferry and had a short wait before we could board and head home.

Thanks for coming and supporting the ride. I really enjoyed my day on the beautiful Isle 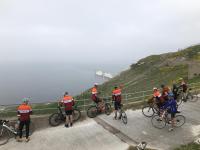 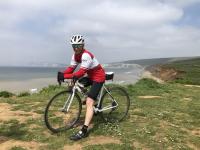 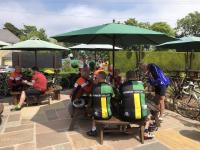 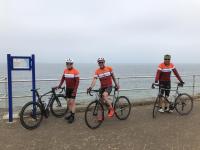 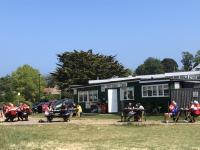 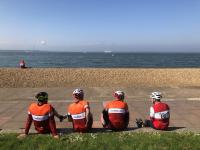 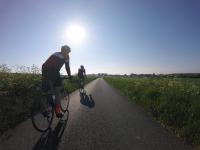