We made excellent progress throughout, arriving at lunch by midday despite a leisurely coffee stop in Chadlington. The Old Shed was a new venue to several Corallians and was universally praised, despite a slight mix-up with the orders.

Richard K left us after lunch to make his own way home. Fully fed and hydrated, the remainder of the group again made good time on the return leg. The leader had to administer admonishment after some spirited off-the-front riding down the lane from Cogges to Stanton Harcourt. Luckily there was a brief stop while Richard H's gear lever was adjusted, which allowed the rest of us to get our breath back.

We made an abortive ice-cream stop at the Maybush - too busy - so opted for the supermarket in Southmoor, where the freezer had just broken and we cleared them out of the remaining goodies before they melted.

By the time we reached Grove the air was alive with the smell of barbeques and lighter fluid! We were back in Wantage just after 3 p.m.

Thanks to Andy and Nick for sweeping duties. 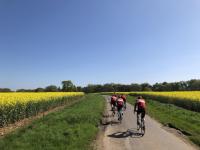 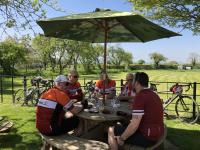