Away Ride - Kingston on Thames

Chris Walters
Andy Newell
Dave McMillan
John Talbot
Louis Hall
Mike Holmes
Richard Hypher
Seven riders today, with a surprise text from Louis just as we were about to set off, he was 5 minutes away, having ridden over from Wantage to Knowle Hill - 60km!

Anyhow, he presented with a flat tyre, his second of the day... and we got away at 9:30. The first fun of the day was getting caught up on Windsor Triathlon - at least we managed to gate-crash the ride part of it and turned off before we were ushered into the T2 zone.

Runnymede was a useful coffee cafe as usual, and we cracked on as far as Staines before Louis' third puncture, this time the front. I hoiked 17 flints out of the front and another one out of the rear. See upcoming thoughts on our Facebook page re tyres....

Puncture 4 was before Sunbury. Confidence in said tyres was now evaporating, and we got to Hampton Court for Louis to divert directly to Kingston in search of a bike shop. Our towpath route was as delightful as ever, and we had just started scoffing al fresco Vietnamese when Louis triumphantly turned up with two new tyres.

The return had ominous skies looming for most of the way, but they were persuaded not to shed a tear on us, which gave us the heart to stop for an ice cream at Virginia Water (after travelling down billionaires row) before the final undulating push back to the cars. 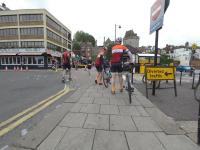 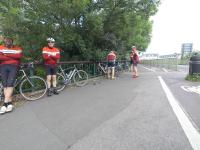 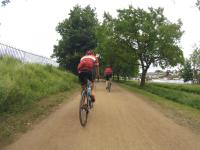 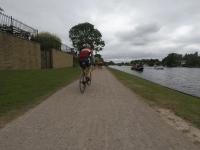