Chris Walters
John Talbot
Ken Castle
Nick Stokell
Peter Wrench
Phil Stubbings
Richard Saunders
Full club kit turnout today - all Corallian riders were in club kit. And then Nick Dunton turned up in his Roberts kit - but it was only a passing social visit to collect some cash. Colin and Simon from Beacon Road Cycling Club were resplendent in their Italianate colours - nice to see them again!

There was a headwind as we headed westwards, but nothing to worry the group. The sun shone, and the hill at Fernham generated some warmth. A quick deviation before Lechlade at St John's Lock gave us the opportunity to inspect Old Father Thames' statue and the Lilliputian houses.

Nick managed to "pick up" a German lady, who talked non-stop at/to him for a good while, clearly still very fit after completing PBP the previous week.

Just before Windrush, John had a puncture which was sorted out very quickly, much to the plaudits from our visitors. On the way quickly a few new roads took us to lunch at Alvescot. Or should I say "most of us" as Phil and Richard had overshot, and we had to use technology to track them down and guide them in, from the comfort of the dining table.

Lunch was leisurely, and didn't disappoint. Even Pete was happy with his Sunday Roast.

Upon setting off, there were a few spots of rain in the air, prompting the donning of waterproofs for those that had packed them. No great fuss for the remainder of the ride - a few new roads by Kelmscot, and we climbed back up the Corallian to Littleworth - quite a quick ride overall, but relatively flat. 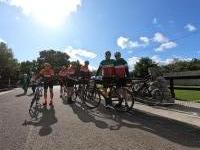 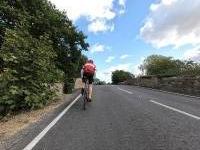 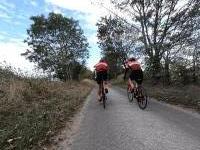