John Talbot
Ken Castle
Nick Stokell
Richard Saunders
With the wind battering the car as I drove to Wantage I was wondering if anyone would turn up to ride today! Three brave souls joined me with some trepidation but actually apart from a couple of sections it wasn't that horrendous.

With amazing planning (!) I had arranged to head into the wind first and the route to Baulking and Uffington was probably the toughest with the wind, a couple of times strong gusts brought us almost to a standstill.

However, once we turned the corner after Shrivenham we had a nice tailwind up Coleshill and Badbury although there was some tree debris on the road on the latter. In Faringdon we discovered that the Coffee House no longer opens on a Saturday or Sunday and we discovered later that the Rookery has closed down as well. A few doors down from the former is the Stay Grounded coffee shop which is cyclist friendly and we joined a runner who had just arrived as well for a natter.

After refreshment, we had a stonking tailwind on the A417 towards Stanford, it was tempting to stay on it all the way to Wantage as we were absolutely flying along! But we still had a lovely tailwind all the way back through Gainfield and Denchworth although we had a few spots of rain blowing in the wind to accompany us.

All in all a very enjoyable morning ride and very glad I decided to go ahead! 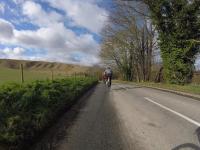 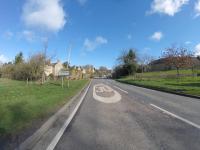 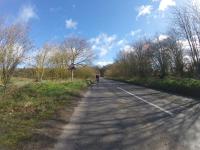