Cycling seemed easy today with light winds and thin air leading to a rapid pace out to Cogges. No incidents other than a very angry passenger of a car as we pulled over at the junction with the A-road at the end of Appleton Road. Almost apoplectic that we'd been riding four abreast and hogging the whole road, total nonsense of course and as usual it was other cars they were being held up by as we continued to Newbridge in the other direction!!

Very pleasant and quiet roads to Cogges where refreshments were enjoyed outside and some goat petting was in order.

The return journey was just as pleasant with a good pace maintained including a new road for some from Appleton to the A420, with a blast along the A338 to Garford.

It was such a nice day that 8 out of 9 stopped for a drink at the KAH with only Louis missing out as he went to check on his son's foot injury, get well soon Henry. 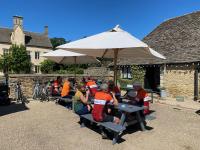 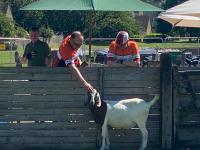