Nick Stokell
John Groves
Joy Arthur
Louis Hall
Nick Dunton
Reasonable weather again after a few wet days, but definitely a "long sleeve" day. Five of us were joined by Joy's partner Peter - good to see him again - allowing for a very sociable group of six. The cycle path onto Denchworth Road in Grove is work in progress and allowed most of us to bypass a queue of traffic at the temporary traffic lights - the exception being John who was caught out by a patch of mud but fortunately emerged unscathed. Unfortunately his Di2 rear derailleur was then found to be not operating, reducing the gear options to two. John earned our admiration by climbing strongly up the hills at Great Coxwell and Highworth for a well-earned coffee at T T Linnet's cafe there.

The return leg passed through Watchfield and up to the spring line road for the roller coaster back to Wantage (except for over-geared John who took the flat route back), and a further chin wag in the KAH beer garden. Very enjoyable - thank you all. 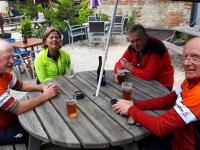