Rachel Bennett
John Groves
John Talbot
Louis Hall
Nick Dunton
Nick Stokell
Pam Stokell
Peter Wrench
Simon Pittard
As eight of us cycled out of the market place there was a call of “hold on” from the ride leader as she realised that her chain had fallen off. Fortunately, this was quickly rectified without her getting her hands dirty.

Spots of rain, which hadn’t been forecast, started to fall as we cycled out of Wantage, and by Denchworth this had turned to drizzle. The wet spell was short lived though, as by the time we reached Drayton the sun had come out, along with John T.

A pleasant ride through the pretty villages of North Moreton, Aston Upthorpe and Blewbury, brought us to the Style Acre café without incident. Pam left us at this point, so missed the lovely coffee. Some of us were waiting longer than others for their coffee and cake, however, this gave John G time to recount some of his cycling related near death experiences, and the story of how he drowned a wasp that flew into his ear by pouring orange juice in it.

We continued on our way, with John T leaving us at Upton, and arrived safely back in the market place just as the ride leader’s chain fell off again. 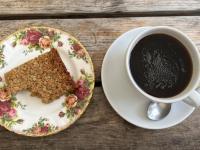 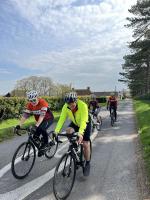 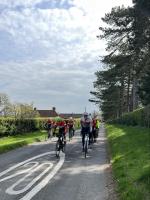