Chris Walters
Adrian West
Barry Gills
John Talbot
Mike Holmes
Nick Dunton
Phil Stubbings
Richard Preece
Some of the morning riders stripped off over lunchtime into more skimpy gear, which turned out to be a good call, as it got nice and warm. Joined by Adrian, Mike and Richard, we cracked on through Ginge and Harwell, making the most of a cunning cut-through (that even the locals didn't know of) to avoid Didcot, we made it to Chilton garden centre to see Mrs Chairman, who had just run 26km, and her friends also taking afternoon coffee - an ideal way to spend your 23rd wedding anniversary.

Afterwards, we took the track of dubious laccess to the bottom of Bury Down, where we stopped and had a natter to the farmer's mother-in-law, who instead of shouting "get orf my land" was most welcoming and noted how the family welcome cyclists as long as the crops aren't damaged - point noted and thank-yous said, we rattled our way back to the tarmac.

Climbing over the Ridgeway and then back up to it again at Farnborough was rather hot for those of us (guilty!) who were still in warmer clothes. Still, the descent of Chain Hill provided sufficient wind chill to cool down again.

Only slightly slower and less hilly than this morning's Red ride, I think pats on the back are in order, and it was great to see Richard out riding again, and in good form! 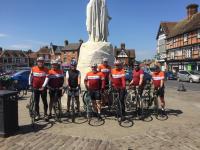 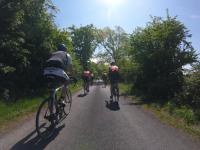 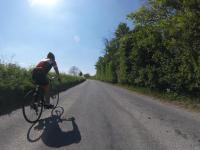 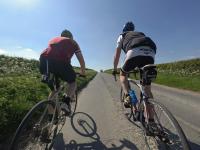