Bubble 1 (Louis, Nick, Pete, Paul and Andy) set off and we didn't see them again until the garden of the King Alfred's Head - exactly how it should be. There was Ford owners' event in the market place with engines being revved and exhausts a-poppin', and the general driver behaviour on the roads was not much less juvenile, with a number of blind passes, and plenty of impatience.

The wind didn't really impact the ride, but it did make it a bit nippy in the beer garden afterwards, with Louis not really dressed for a second pint.

A big thank you to those who've come along and supported the summer evening season, curtailed as it has been, and also special thanks to ride and bubble leaders who've allowed the rides to happen!

Bubble 1 was led off by Nick S (thanks!), with Pam, Mike, Pete, Louis and Larry in tow.

No dramas on the way out, save for a SMIDSY moment (one of bubble 2
perpetrated!) in Uffington.

The Carpenters' Canteen in Coleshill were really well set up for cycling groups, and we got our food and drink in good time... the Apple Crumble Cake was to die for.

A group from Newbury Road Club arrived, so I took an oportunity for a distanced natter with a couple of old friends in that group.

The journet back was as uneventful on the way out, with Paul leaving us in Grove. 12:20 back at WMP, so me, Mike and Pete had a very pleasant lunch and coffee at Marmalade, and right on cue there were a few spots at 13:00.

White Horse Hill RIDE IS ON

Nick Stokell
Andy Newell
Ken Castle
Lawrence Gill
I was half hoping nobody would turn up for this ride given the amount of rain in the previous 48 hours and the fact that it was still drizzling a little. But there was Ken eager to conquer Dragon Hill and Andy arrived shortly after. We set off on the modified route, modified to avoid the A417 closure at Challow Station. The drizzle stopped and there was even a little brightness as we made rapid progress through Childrey, Sparsholt and Westcot. Ken sailed up Dragon Hill where we encountered Larry waiting for us. A cautious descent followed and we swept into Uffington where my rear tubeless tyre started spraying white sealant liberally over the road and the underside of my mudguard. It quickly became evident that the Caffelatex sealant was not up to sealing this puncture, so an injection of Zot catalyst was attempted. I suspected that insufficient sealant remained in the tyre at this point for effective repair so I added more sealant through the valve (thanks to the Gentleman outside whose house we had stopped, who provided both track pump and valve core remover). The tyre now held up to about 30 psi so we thought we would set off back to Wantage. It did hold until Baulking where some pumps from the hand pump got us a further km. At this point, with the light fading, I called for the fourth emergency service (Pam) and the rest of the group made their way back to Wantage. By good luck I didn't attempt fitting of an inner tube which would have been unsuccessful (see below), and by this stage there was possibly insufficient sealant for a repair using an anchovy.

As I needed the bike for a long ride the following day I replaced the tyre that evening. This was straightforward except for the unseating of the old tyre from the rim, onto which it was very firmly glued - use of a G clamp necessary! Attached photo shows the c 5 mm cut. My confidence in tubeless road tyres is now severely dented.

Well done to Ken for proving to himself what we all knew he could do, and thank you for your patience and Andy's advice on matters tubeless. 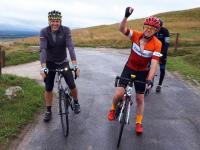 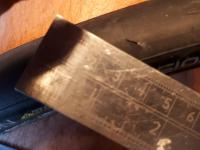 Progress was smooth and mostly uneventful except for when Nick went for the Kardashian look by getting stung on the top lip by a wasp. We encountered a TT event in progress in a couple of places where we crossed the A429 , which was nice to see and there we some impressive speeds being achieved. We however, were more focused on the lunch stop at Malmesbury Garden Centre, where some impressive scoffing of fried food was achieved. After lunch the bubbles swapped road positions for the second half of the ride. Again a smooth run with speeds slowly increasing as we neared the finish. We gathered at the finish for socially distant ice-creams and a chat before jumping in our cars to go home.

Kudos to Louis who had ridden out to the start from Wantage and also rode back afterwards. 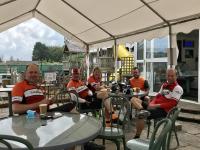 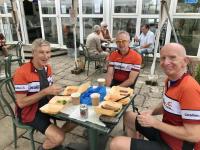 Louis Hall
Nick Stokell
There were quite a few cracks of thunder in the hour before the ride was due to set off. Combined with a power outage in Wantage this was clearly discouraging. Just one rider joined the leader, so I didn't have to make the difficult solo ride decision.

The question in our minds as we set off was, were the no-shows right to give this one a miss?

There was still quite a lot of moisture in the air as we set off and rode past the stables towards the Hendreds. There were a couple of puddles going through Drayton and relatively little traffic. As we left Abingdon and turned into Barrow Road it became clear that there had been an intense storm in the Vale. The road was flooded!

We just rode through the first flood, which submerged our bottom brackets. The second flood wasn't much better. Our bikes were making some very odd grinding noises by then.

We just pressed on with our ride, passing some fallen branches and the occasional puddle, as the rain moistened us more. We got back to the Market Place ahead of schedule and each of us decided to forego a congratulatory drink in the pub for a cleansing shower in our respective homes.
9SundayAUGUST

Peter Wrench
Chris Walters
Jez Kent
Ken Castle
Louis Hall
Mike Holmes
Nick Stokell
Pam Stokell
Paul Bentley
Richard Saunders
Ten riders met up in the marketplace and split into two bubbles of four and six. Louis led bubble one, with Nick, Pam and Richard away first and the remaining six of us followed a few minutes later. The cool initial conditions (some started in arm-warmers and gilets) were perfect for taking on the hilly early stages up Chain Hill and on through Ilsley to Compton after which the sun came out and it warmed up nicely for the drop into Streatley. Refuelled at the Village Cafe in Goring we rolled happily on to Wallingford and through Sutton Courtenay to complete the loop. A great way to spend the morning.
5WednesdayAUGUST

Understandably, there was some trepidation as we set off with the wind behind us towards Grove and Denchworth. The only issue of note was a young rabbit which ran in front of the leader going past the burger bar in Grove. Fortunately it found it's way back into the grass verge.

We maintained a good pace together to Blowingstone and then spread out a little up the hill, where several personal top 3 times were achieved. Regrouping at the top we rolled down to Seven Barrows and met Mike, who had been detained at work and rode out on the reverse route to meet us.

Conditions were ideal for the B4001 and then through the Letcombes. We returned at pace, completing the ride in 90 minutes. This gave plenty of time to reflect in the welcoming garden of King Alfred's Head.
2SundayAUGUST

Both bubbles had a one stop strategy: lunch in Chipping Norton. However, meeting up at Chadlington, we all took elevenses at the Cafe de la Post and set a two stop strategy.

Bubble 2 went straight through Charlbury and passed bubble 1 who took the circuitous route around Charlbury. Bubble 2 chose to stop at Huffkins in Witney, while bubble 1 went on to Cogges Farm. Bubble 1 then maintained their slight advantage back to Wantage Market Place.

There were no punctures on a wonderful day for riding in the Cotswolds.

Nick Stokell
Andy Newell
Chris Walters
Claire Newell
John Talbot
Jon Blamey
Louis Hall
Mike Holmes
Paul Jarvis
Peter Wrench
Phil Ingles
Richard Saunders
A lovely evening brought 12 of us out and Richard kindly volunteered to lead the second bubble. Both bubbles made quick progress up Hackpen Hill and in fact throughout the ride, despite some route eccentricities (I blame RwGPS). A low-flying Chinook helicopter provided some entertainment near Denchworth and both bubbles got back to Wantage Market Square around 2015, allowing some of us to enjoy a convivial pint in the KAH garden.
26SundayJULY

Chris Walters
John Groves
Mike Holmes
Pam Stokell
Paul Bentley
Phil Stubbings
Richard Preece
The weather forecast looked to be OK. Only one of the Holiday Club made it out. The bubble size of 6 was just perfect.

We made good pace on the undulating part of the Spring Line Road and then picked up the pleasant westerly from Fernham to deliver us express-style towards Abingdon. We also picked up Richard near Hinton Waldrist, breaking bubble etiquette briefly - Pam was planning to leave the ride before coffee anyway.

On arrival at Abingdon, Pam left us and the heavens opened. Fortunately Costa had some indoor socially distanced seats, so we donned our face masks and held up the shop. I had made a comment earlier, having seen the skies, that if it rained, I'd eat my helmet. Fortunately (polystyrene is not my culinary favourite) it threw it down as we left Abingdon. Really heavy rain as we traversed the lovely new surface of Peep O'day Lane.

Mike left us at Steventon to bag a few more miles, and the main body of the ride carried on down the A338, pretty bedraggled.